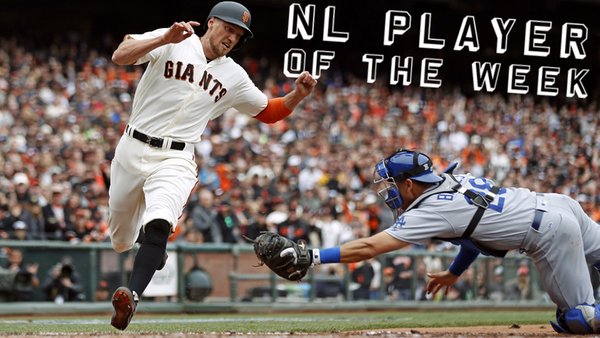 San Francisco Giants outfielder Hunter Pence was named the National League Player of the Week for the week of April 25-May 1st, the league announced Monday. In six games last week, Pence tied for the Major League lead with 10 RBI, while simultaneously posting the NL’s second-highest slugging percentage. The 33-year-old also ranked among the league’s leaders in batting average, total bases and on-base percentage.

Pence knocked a pair of bombs and had four runs scored to add more fuel to the fire. During the Giants 13-9 victory over the San Diego Padres last week, he went 3-for=3 with a pair of walks and a triple — his first of the season — and three RBI in the contest.

During Saturday’s losing effort against the New York Mets, Pence went 2-for-4, driving in three runs. He ended by posting his second three-RBI performance of the week in Sunday’s series finale against the Mets, where San Francisco emerged victorious by the final of 6-1. Pence hit a two-run homer off the Mets’ Noah Syndergaard, and provided further insurance with a run-scoring single in the sixth inning of the winning effort. The week was nearly complete when Pence narrowly missed hitting a grand slam, as well.

The selection equals the fourth time the three-time All Star has been chosen for Player of the Week honors, and second since joining the Giants at the 2012 trade deadline. He’s previously been selected in the 2013, 2010 and 2007 seasons respectively.