After a record-setting month, Ryan Schimpf was named the National League Rookie of the Month for July 2016. He becomes the fourth Padres player to win the award, following shortstop Khalil Greene (April and August 2004), Xavier Nady (May 2003), and Josh Barfield (July 2006).

He was second in runs scored and OPS (1.092) and tied for second among NL rookies in RBIs, while his batting average was fourth.

The nine home runs are also the most ever by a Padres rookie in a calendar month.

Schimpf, a fifth-round draft pick of the Toronto Blue Jays in 2009, was signed by the Padres as a free agent last November.

“We’re really pleased with where he’s come from,” Padres manager Andy Green said. “I think his first 30 at-bats, he had two or three hits and didn’t look so good, but he was taking his walks and showing patience and the next thing you know he’s leading all major leaguers in home runs in the month of July.” 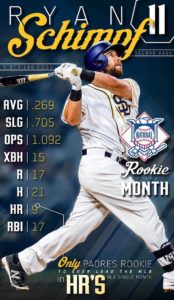