The Roberto Clemente Award is the annual recognition of a player from each MLB Club who best represents the game through extraordinary character, community involvement, philanthropy and positive contributions, both on and off the field.

Hendriks and his wife, Kristi, are working with Big League Impact and Striking Out Poverty with the mission of ending hunger and poverty in the Dominican Republic. Hendriks has raised money through sales of the Striking Out Poverty t-shirt by Athletes Brand and an online fundraiser, which currently results in a donation of more than $500 from supporters each time he records a strikeout. Hendriks also personally pledges $100 per strikeout and $200 per walk. He also supports Players for Pits, a rescue committed to saving pit bulls and pit bull mix-breed dogs, as well as Tony La Russa’s Animal Rescue Foundation (ARF), Paw Town Recue, Remember Me Thursday, the Petco Foundation, Athletes for Animals, and Mission K-9 Rescue. 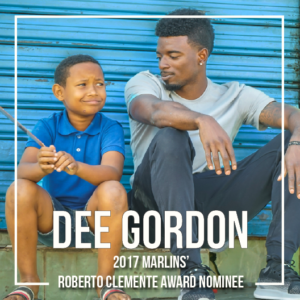 Dee Gordon hosts local children at Marlins Park as part of his Flash of Hope program. This program is in partnership with the state attorney’s office three years ago to support children who have been affected by domestic violence. He also partnered with Food for the Hungry’s Striking Out Poverty initiative to support nine impoverished communities in the Dominican Republic during a mission trip in January 2017. Gordon continued his support via a Striking Out Poverty t-shirt by Athletes Brand and an online fundraiser, which currently results in a donation of more than $400 from supporters each time he steals a base. Gordon also personally pledges $200 per stolen base. He also supports the Boys & Girls Club of Highlands County, where Dee hosts an annual Christmas party and basketball tournament for locals

The concept of honoring Major League players for their philanthropic work was created in 1971 as the “Commissioner’s Award.” The recognition was renamed to the “Roberto Clemente Award” in 1973 in honor of the Hall of Famer and 15-time All-Star who died in a plane crash on New Year’s Eve 1972 while attempting to deliver supplies to earthquake victims in Nicaragua. Major League Baseball has commemorated Roberto Clemente Day each September since 2002.