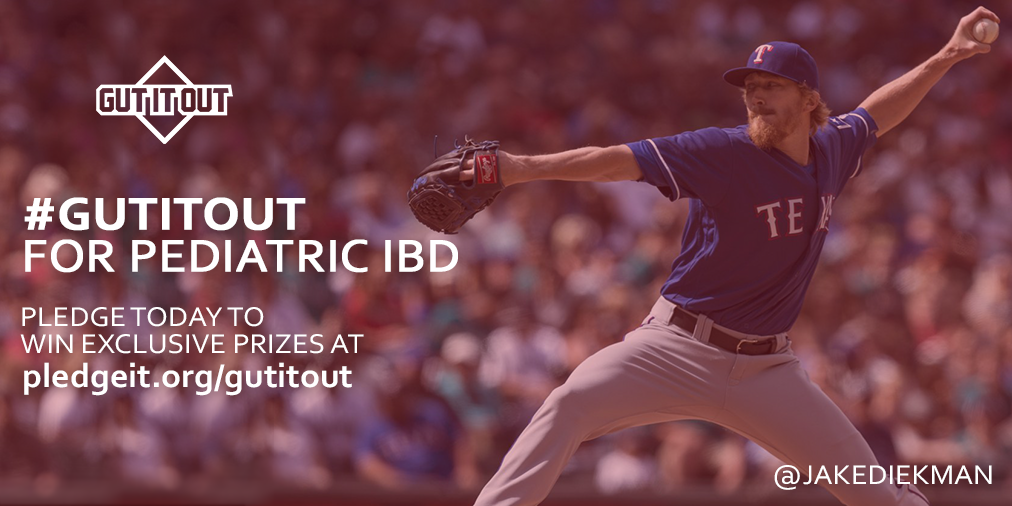 Texas Rangers pitcher, Jake Diekman, announced his pledge to support the Gut It Out Foundation, the organization he founded to strengthen relationships and resources within the inflammatory bowel disease (IBD) community. Diekman has pledged $100 for every strikeout he earns this season. Fans can join him in improving the quality of life for the estimated 1.6 million IBD patients in America by making a pledge of their own for a chance to win exclusive prizes including limited edition “Gut It Out” sweatpants at pledgeit.org/gutitout.

“I am blessed to feel healthy and strong going in to this season,” said Diekman, who sat out a majority of the 2017 season due to three surgeries to treat his ulcerative colitis. “This campaign reflects my dedication to my team and to the IBD community that helped me get back on the mound.”

Diekman founded the Gut It Out Foundation in September 2017 with his wife and caretaker, Amanda. The Foundation has given $15,000 in grants in just six months. Prior to the Foundation’s inception, he and his wife volunteered for Crohn’s and ulcerative colitis organizations across the country since 2014.

Diekman’s goal is to raise $20,000 through his Pledge It campaign. Meeting the goal will be made possible by the support of fans who make their own pledge. Fans who join the campaign will be eligible for rewards such as autographed items, game tickets, meet and greets, and on-field experiences.

About the Gut It Out Foundation

The Gut It Out Foundation aims to connect patients and caregivers through education and inspiration in order to strengthen relationships and resources within the IBD community. The Foundation supports organizations and efforts dedicated to improving the quality of life for those in the IBD community in areas such as: education, research, pediatric care and support groups. The organization’s founder, Jake Diekman, was diagnosed with ulcerative colitis at the age of 10. For more information, please visit www.gutitoutfoundation.org. The Gut It Out Foundation is a nonprofit public benefit corporation operating through a fiscal sponsorship with Players’ Philanthropy Fund (Federal Tax ID: 27-6601178), a Maryland charitable trust recognized by the IRS with federal tax-exempt status as a public charity under Section 501(c)(3).